As 2016 draws to a close, you begin to reflect on the year you’ve had. What have you achieved? Where have you been? The people you’ve met.

Upon reflection you’ll probably begin to plan your 2017, set your resolutions and goals to accomplish for the year ahead.

You’ll probably plan to conquer them, and they’ll morph over time as the great obstacle of life gets in the way. They’ll change, adapt; against your best intentions to do well. But as each year comes you’ll enter and leave it, hopefully a different person to the last.

Hopefully you haven’t become stale and settled; but if you have, it’s as long as you’re happy!

I started off 2016, with the view of being a better person than the last. As I start every year.

Main goal, Health and Fitness. Codeword for ‘running my ass through 2016.’ Evidentially growing a Forrest Gump beard along the way.

With all intent and purpose of maintaining everything I had, and running everyday for the year, looking after my body through injury that could easily arise. Obviously the clear one, would be PB’s! And PB I did in every single event I could have, 5K, 10k, 9 mile, 10 mile, Half Marathon, 20 mile, Marathon.

Marathon plans in the early part of the year and Snowdonia Trail in for  July, I knew I had to hit the ground running. I had escalated my training, getting my time of foot principles in and made a move to try some fells and hills in preparation for the mountain! I focussed mainly on Manchester for April and switched focus straight after to the trails and hills for Snowdonia. Manchester is extremely flat, anything is in comparison to Snowdon. But Manchester boasts to be the flattest in the U.K! So training was switched up indeed. I even penned Milton Keynes Marathon in, in the mean time to keep my miles ticking over through May and that began my new venture. A marathon for fun, not for time but for fun. My secret marathon, not telling anyone until I actually had done it. Not having the pressure of marathon plans and time.

I ran well in Manchester narrowly missing out on sub 2:45 but achieving a 2:45:49. This would be my PB for the year. Nevertheless I was happy with this at the time, only just managing to break the 80 minute half marathon barrier a month earlier at Retford. I went to Milton Keynes high on confidence and in the hope of beating my first ever marathon time set here in 2013. And that I almost certainly did do! 2:52:48 finishing in a high 11th position. Somewhat stronger and fitter than 3 years ago.

My PB at Parkrun now on the way down and 10k time improved, my next target on the horizon was the Snowdonia Trail Marathon. The night before realising I hadn’t actually run with my full gear on my back yet and the first marathon nerves returning. I was here again, like the kid before Milton Keynes in 2013. Adjusting my rucksack a thousand times. Not sleeping and panicking, fear of failure and not being able to complete it. My training had increased, my miles had been done. The easy bit was running the marathon. Last years winning time was around 4 hours, so it isn’t a PB course. It’s an adventure, morning of the marathon porridge consumed and Nutella spread, I was off to the startline. Seeing the half marathon warriors in Bryan, Damien, Kevin and Adrian settled my nerves and we were off. Rucksack on.

That was that for the first half of the year, marathon plans on hold until October time. I had two options sit back in my achievements or look towards the next. The previous years, I’ve sat back for the second half and running has been left and put on hold, just using miles to tick into the next. But this year, I wanted it to be different and I wanted to enjoy the second half. I wanted races to be easy and not difficult. I didn’t wanna feel crap after every run. I had a stint in the early part of 2016 with stomach cramps and tightness; I wasn’t having that again. I wanted to push on and make myself stronger for it. What doesn’t kill you makes you stronger and I will die trying. My marathon training didn’t stop after Snowdonia and in truth it never stops. Marathon ready all year round. My life is organised around the marathon and my races are there in the build up to the next marathon. I pushed on and pencilled Hull in for September in preparation for York and Snowdonia in October. I wanted confidence out of Hull and knowledge that I can guarantee a sub 3 at York. I set my self to target sub 3. A steady pace and took it from there, I ran possibly the best race of my life and finished in 2:51:01; 6th place. Plenty left in the tank and confidence full, I knew I could go out from the gun at York. But maybe it might hinder my chances of lasting the full 26, I had begun running marathons in training, miles had climbed to 581 for the month of September; time on foot done. I was ready for what October was to bring. I went out strong at York aiming for a 2:45 pace; mentally drained in the last 6 mile I ran a 2:48:18. Feeling a little negative with myself, it’s quite hard to see that I’ve improved by 10 minutes from last year? Plenty of obstacles in the way; but in hindsight I’m happy with the achievement at York and I’ll be back again next year for my 5th outing there! Snowdonia Marathon on the horizon line now, a run for fun, ideally beat my previous best. If I could. I was feeling strong and my legs were ready for a beautiful marathon. Aim here really is not to fall coming down the last hill! I ran well and took it steady around pace didn’t need to be exceptionally fast, but it needed to be comfortable saving some for the last climb. So I was pleased to cross the line in 16th position hitting 2:58:04. That was that for the year of marathons; 6 completed, many more in training. My full year structured around the next marathon. I’ve enjoyed my running off the back of October, hitting a new Parkrun PB of 17:31; it’s gave me ambitions to go higher and faster. Hitting a 10k PB of 35:07 and a 10 mile PB of 58:27. Winning my first event at Holly Hustle. Running in the winds at the ‘Isle of Axholme.’ The cold January at Meltham or the scorching Spencer’s Dash where I felt like I was on the edge of an heart attack. Stopping for a pee and still breaking 80 minutes at the Vale of York. Running to and from the ‘local’ races. Slipping and falling at Parkrun. Getting chased by cows on the boundary runs, drinking from the ‘waterfall’ on the dunford express. Gone through 4 watches and about 8 pair of running shoes. I probably stink half of the time and run more than I see any other human being. I spend time on myself or run in groups with others. I think a lot. I live in shorts and running clothes, half of the time having them on underneath my work gear; like superman ready to conquer again. I’ve probably not eaten half as much as I should have, found out my body can’t tolerate bread anymore; but then somedays I’ve had enough pasta for the whole of England, or even 4 jacket potatos in one day? I’ll eat 2 minutes before leaving the house for a run and literally be back on it as soon as I get back in. ﻿

But do you know what, I wouldn’t change any of it! I’ve enjoyed it and I will do it all again. A full calendar day for 2016. I’ve run every single day.

I’ve covered 5,943 miles, but it depends where you look 5,955 on the other graph; but it’s more than most people’s cars and a 1/4 of the way around the world. Spent around 700 hours running and that’s only the recorded miles. 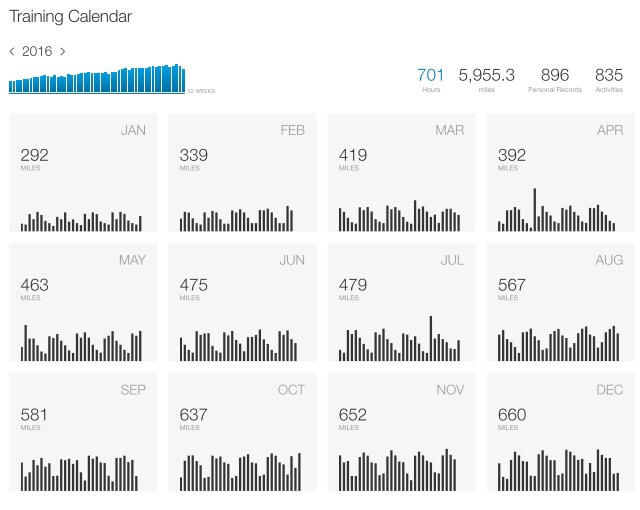 I’ve bigger plans for next year, I’ll set my goals a day before, I’ll train a lot and get my miles in; I’ll be Marathon ready all year round. I’ll keep on my feet and do the same as I’ve done everyday so far; I’ll better myself by small margins each week. After all, it’s just another day in your life. My complete aim for running is for it to have the ability to take me from A to B. Maybe to C and all the way through to Z on the way. But as long as it takes me places and I see things you can’t see anywhere else, I will be happy. There has been many moments I’ve wished I had a camera for, but I’ve been grateful to have seen them with my own eyes. Running has become a lifestyle, it has gave me fulfillment and a passion to explore. Something that sport has always done and will continue to do so for what I hope a long time to come! 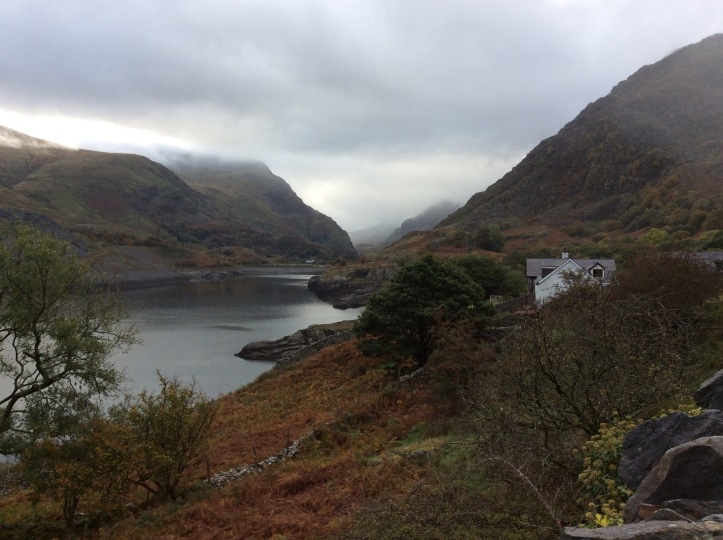 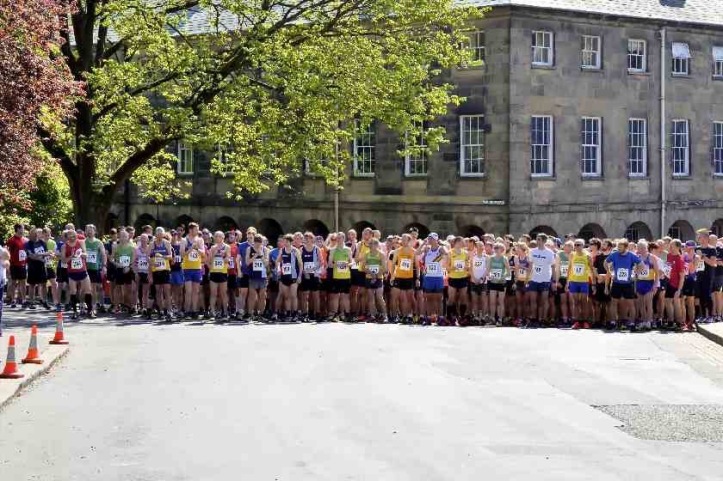 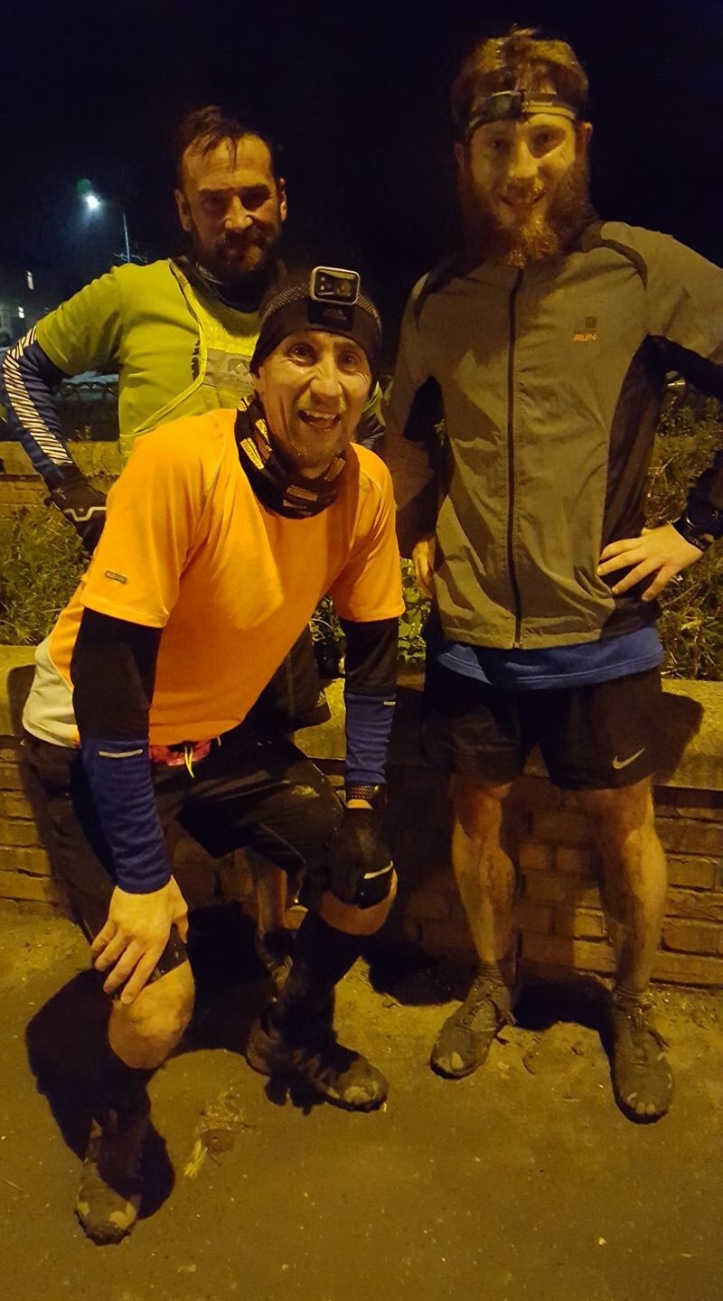 Go out smash your 2017, remember there will always be something harder than what you are doing right now. Take strength from your achievements and look towards the next. Believe in yourself and you can do anything you set your mind towards. I’ve run my way through 2016.

Ps. Snowdonia Marathon entry opens tonight. Fancy a challenge get yourself in!

Ps. Ps. Cheers to Steve Frith for my photo of 2016, you’ve been there to take the snaps when I’ve not.