A local one; but believe it or not, only the second time I will have run this course and event. Opting in previous years to have run other races that have been further in distance; that are on the same day. But lately nothing can trump a local event for atmosphere and friendliness!

My only attempt here being in 2014; and my only attempt at a 5 mile race, so far. 30 minutes and 50 seconds is what the PB stands at then! I finished that day in 48th position. 2 months shy of my 20th birthday. I’ve changed a little since then, grown a beard, run a few more miles and stopped drinking.

But who knows what today could bring!

The plan was to fit Wombwell 5 in the middle of a long run, running to the race from home and running back afterwards. From home it’s around 5 mile, largely downhill; but on the way back, mostly uphill, obviously.. but we’ll see how the legs feel to determine how far. ﻿

Well that was the plan, on Friday. I have worked everyday this week until 9 at night. Really drained and then struggled to sleep at night. Friday night’s graveyard shift is a session, 7-9 at Dearne ALC, working with kids providing a free football session. I got home, had some food, climbed into bed and managed 1 hours sleep before I fell out of bed and shuffled around the house before Parkrun, feeling wounded, banging headache. Cold, despite it being the hottest day of the year, so far. I was really quite annoyed, as the conditions were absolutely perfect. I went to work afterwards, still feeling cold and headache. After work I then managed to sleep my afternoon away. My watch measures heart rate constantly, and whilst resting in bed asleep, I usually get 40-50 BPM, yesterday I was hitting highs of 120, whilst laying down and sleeping. Usually I run 13-15 mile on Saturday, I only ran to 3.1 at Parkrun and the 400 metres up my street and back down again afterwards. I definitely felt like I had cheated myself Saturday night.

Sunday came around, I woke up feeling like I had more sleep. A good thing, but still feeling lathergic and a headache still present. I knew today was going to be a struggle and getting out of bed was a difficult task! I decided I’d drive to the race as soon as I woke, at least that way I’d have my car if I decided to bunk out and not race after my warm up. I plodded around the house, managing to finish breakfast; an improvement to yesterday’s half a bowl!

I set off relatively late at 9.40 making it to wombwell by 9.50. A quick run through to the go kart track and I soon found myself joining the enormous queue for the chip tags. Number 118 today. I have the long hair at the minute and a beard to match. Off I went for the rest of my warm up; clocking 5k. At a progressive pace, sweating way more than usual upon finishing! Speaking to Lee Nash as we approached the start, asking him for his aim; around 30 ish, as long as he beats his previous PB. So I knew in my head then that if I could stay in front of him, I’d at least beat my PB of 30:50. Despite feeling run down, I still wanted to beat it. Looking around on the start line as the pack of runners approached, Scott Hinchcliffe, Paul Dodd, Mark Havenhand, Stuart Wilson, Chris Wells, Richard Smith. All really good, top quality runners, but it would take a miraculous recovery in the next minute or so. For me to be up there and competing with them today. In the back of my mind on Friday I knew I was in 27/28 minute shape for the 5 mile distance. But under confident I set my psychological pace at 6 minute miles, going by my current health. If I could do that today, I knew I’d be lucky.

Quick race briefing from Dave Bennett and off we went, a lap around the go kart track before we undertook the sights of Wombwell and Darfield. I settled soon into position, letting a lead pack form at the front and me settling in behind Paul Dodd. 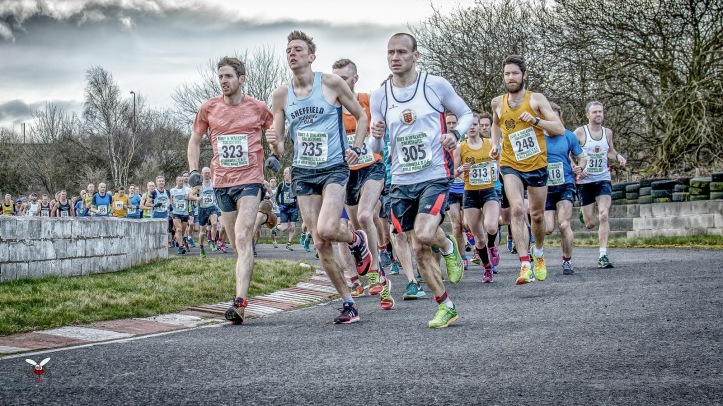 Seeing the back of Stuart early into the race. Off out into Wombwell we go, soon being passed by Mark and Chris, but still sat in behind Paul Dodd; although he was now pulling away, my legs didn’t feel like they are my legs, they’re heavy and don’t feel all too strong, 5:38 for my first mile split. Quite surprising really.

Settled in now, truly. On the way up Snape Hill towards Darfield, I didn’t wanna loose distance between me and the guys in front. I tried to kick on just to gain something, which I did. But my legs didn’t feel like they had the strength to climb. At all. This hill is nothing in comparison to any hill I’ve raced or run up before. Reaching the top and it’s all downhill from here. 6:25 for the second split, the hill made a massive impact on the ambition of 6 minute miles. Looping around the sights of Darfield now, seeing some young kids hanging out the bedroom window cheering us on. Some local lads on the end of their drive smoking, shouting ‘I might tek up running,’ and the older generation stood at the end of their drives, politely clapping and cheering us on; oh it’s good to be in tarn! Then a familiar sight of Jane and Bryan clapping us by. Over half way now, 3rd split knocked out in 5:51; back on pace. Still downhill and still behind Paul, although he had pulled away and I had been passed. Now finding myself in 15th place; rather than my previous 13th. Still charging down the hill to rejoin the bottom of Snape Hill; only to be overtaken by an impatient driver, driving right on my heels; who we then caught up again at the junction, for him to over rev the engine and do the same again. Mile 4 went by in 5:48; fastly approaching the go kart track now for a precise 1 and half laps to finish. I again surprised myself at the finish clocking 5:39 for the final split. A kick from seeing Adrian Gough, saying them 3 places are yours and his words of encouragement helped massively and seeing other runners coming around the track at the same time. I cheekily managed to overtake Paul on the first lap of the track but couldn’t or wouldn’t catch the other 2, on another day it would’ve definitely been a different story. I finished in: 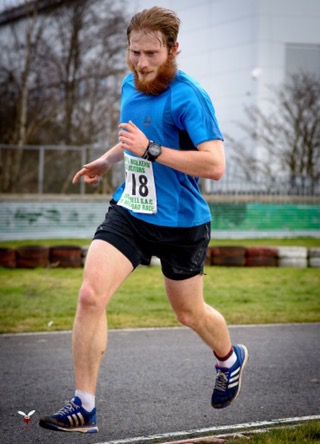 Scott managed to finish in 3rd. And we have been in and around each other at Parkrun the last few week. So I do believe I could’ve been up there today. Of course I do. But on the day it wasn’t to be and late nights and early mornings have caught up with me this weekend. It’s been an horrible weekend of running. I will be running an enforced ‘cutback’ week, especially for the next few days at least until I feel like I’ve somewhat recovered.

A positive to take out of today’s attempt was that I did manage to beat my 5 mile PB that stood at 3 years old. Many other runners managed to PB as well and Lee managed to beat his time setting himself a new PB. The Wombwell 5 will be there next year; and I will be back next year, hopefully fit and ready to break 27 minutes.

Ps. I found out how to make the text smaller, should make for easier reading? Let me know if it doesn’t.

First run out for ‘The Artist’ tonight from @atreyurunning
Cracking long weekend in the lakes with @n4omiid and Bessie dog!
Might be wearing a @getabearhug support and I better keep my feet on the ground but my first pain free day in what feels like forever! ❤️
Forever grateful for the opportunity to pin a number on the chest, there’s no such thing as a bad race. It’s all an experience, teaching you about the next! We’re all learning…
The life of a injured runner...
Is this throwing it back to summer already?
Yesterday was tough, mentally and physically…
Cutty Sark looked a bit quieter since I was last there at the @londonmarathon
Got absolutely soaked this morning running around the London Docks! ⛈⚡️