When it comes to running, we all have our different story as to why we start, where did we begin, what built up our confidence enough so that we can go out and run.

In the build up to a marathon I always remind myself of the circumstances in which I started running and the progress I have made since then. This is something I personally take pride in. When I first started running, I didn’t really know anything about it. I used to map a distance on google maps and run the same route over and over again. Using my Casio watch to time it or holding my iPod. There were 2 runs a 6 mile and a 3 mile one. I used to do the 3 mile more often than not! I didn’t have a clue that it was nearly 5k and 10k, just a distance plucked from the air. I didn’t run it all, I walked and just got out of the house really. I started in 2008/09, finding that it helped my football training. I used to run at most once or twice a month. I didn’t run cross country or track at school, despite winning the 1500m on sports day.

In 2010 I downloaded the Nike Plus running app, and got myself a footpod, I was playing football at college and started going to the gym more regularly. One of my early goals was to run 5 mile on four occasions in 6 week…

Throughout college, I was obsessive over the gym, much preferring to lift heavy in there, building muscle mass and so on. Running really hadn’t crossed my mind, it was just something that I did so I could run around a pitch a little easier. I was finding it a struggle anyway to build muscle mass, and I ain’t ever going to be one to be ‘massive’ but in my second year, I had a pair of new eyes opened up to me. In the form of strength and conditioning for sport. The college had employed a few new coaches to look after the football lads, these were Nathan Winder and Paul Heckingbottom. Using what I learnt from the strength and conditioning sessions (once a week), then the football sessions (3 times a week). I was putting it into my own gym programs, to get fitter and stronger for sport. I was playing football everyday, a game twice a week and training 6 times a week and loving it again. I was running the odd occasion, mainly completing the 1 or 2 mile route home from college. The main aim to build lean muscle mass, better for sports performance

Upon leaving college and gaining a job at Barnsley FC, starting university. I had a busy September/October that year! I needed something, that could fit around my routine, a sport that I could play whenever it suited me. I signed on with AFC Emley, but that was twice a week; a far cry from training and playing everyday at college. So I started running and then entered an event in Manchester called ‘The Survival of the Fittest’ a wrote myself a training program, which I still keep up on my wardrobes.. I was hitting 4-5 runs a week, going up to 6 mile. I was gymming, but I was also drinking with university just starting! One of my most memorable runs from this period was probably a run back from Barnsley Town on a Saturday night, in my jeans and shirt. I even logged it on my program, as a training run!! (See 14/10/2012, the 1.5 mile replacement)

The Saturday morning in November came around, and me and Clayton travelled over to Manchester, it was freezing! I had completed 2 months of training in preparation for it, the only real thing I remember was jumping in Manchester Canal and it being cold. I completed the route, in 1 hours 8 minutes, I received my first ever finishers top, my first ever medal. I arrived home and slept all day, and went out that night with the lads to ‘celebrate.’ 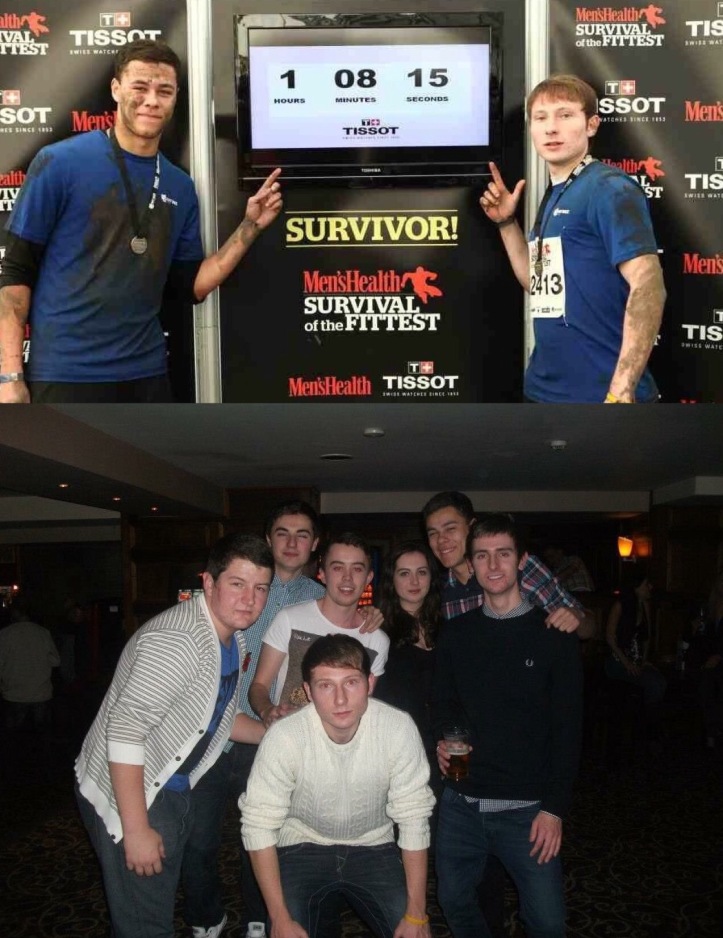 After going out, and coming home I ended up sleeping on the freezing concrete doorstep for a little while as I forgot my key. It was alright though, I was a survivor. James at his girlfriends, and my Mum and Dad at my Nan-Nan’s. It turns out that this night, I was to become a runner, for me this was the turning point in deciding. My Nan-Nan had lung cancer, having stopped her chemo, through her choice; it was inevitable. She had lost her voicebox, due to throat cancer, so I had grown up with the constant thought that my Nan was a dalek, using an external box to talk. Mainly (if not all) because of the smoking craze that surrounded her childhood and life. Having had her Mum (My Great Nan-Nan Emma) out live her and reach 100. I was very close to my Nan-Nan, spending most days there between and after college, made a lot easier after I learnt to drive. I had planned on going that afternoon, after my own Survival, to show her my medal and just sit and chat. But it was really nothing measured in comparison. I never went that afternoon, choosing to sleep; probably the first afternoon I had missed.

It never is a right time, but it happened at the right time for me, in which it motivated me to make certain choices. I had carried on running, having got myself into a routine in the build up. I needed something to aim for, a goal. I decided that I would enter a marathon, I certainly looked at London, as that was all I knew existed. Obviously entries had already gone, I looked at alternatives, but thinking no other marathon measured in terms of the challenge as London. I stumbled across Milton Keynes, promising to be a flat course and the hotel that we could stay was built into the stadium where the finish is! I entered it and decided to raise some money for Cancer Research, also entering ‘The Survival of the Fittest 2013’ in Manchester. Having not known the true distance of a marathon, I probably didn’t know what was about to come.

The Isle of Axholme Half Marathon

Having being recommended this by Keith Littlewood at the Gilberdyke 10 mile. I had forgotten about it, but when I was looking for races to enter to fill my calendar up in the build up to York Marathon. Preferring Half Marathon’s to 10k’s, I always choose the further distance if it is available, the only exception to the rule, is if there is a local 10k or event on, such as the Barnsley 10k, Cannon Hall, Penistone, anyway you get the picture there. The real test here is to see if my legs have recovered after last weeks Hull Marathon and see if I can handle a race pace, with York little under 2 weeks away now.

The course profile appears to be majorly flat, with it being Doncaster/ Scunthorpe way, they usually are, with an early 10k PB coming from Cusworth 10k in 2013 and my Half Marathon PB being the North Lincs Half in Scunthorpe. I’ve run quite well so far this month and enjoyed the pain of running, quite sadistically. 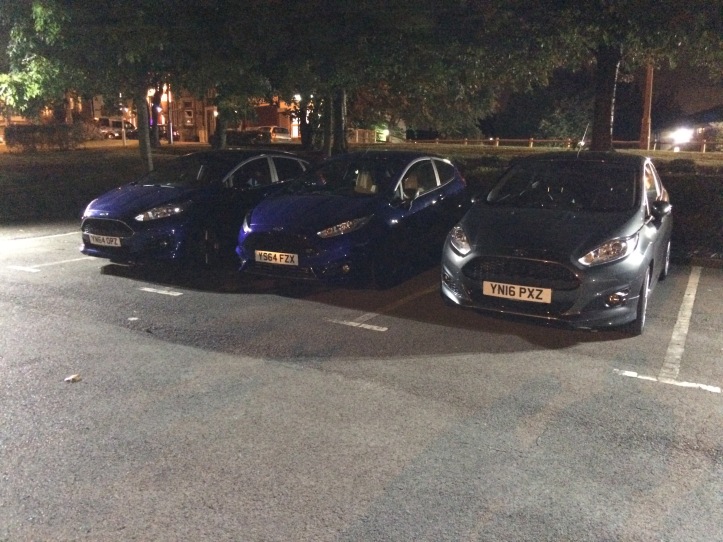 Couldn’t help but take a photo of all 3 cars together last night! We went out for food as it was James’s birthday on Friday, but I wouldn’t say I ate too bad. Mainly had Chicken, but finished off some Salmon, James’s pizza, a bit of Dads burger and my Mums chips. But got home relatively early and even having time for a Walking Dead episode, catching up again, before the new series starts. I had my usual Porridge with a triple helping of Nutella and set off around 8.

The real test here is to see if I’ve recovered from Hull, despite running 24 mile the day after and pacing 18 minutes yesterday at Parkruns pacing event. Isle of Axholme has exotic as it sounds, sits in between Doncaster and Scunthorpe. About an hours dust cap less drive from Barnsley. Motivated by the music choice of ‘The Strokes.’ Stopping off at the services on the way to beat to toilet queues at the race, I made it by 9. Having a chat with a guy in the car park who owned the same shoes as me, the adios boosts and flyknit racer’s! What are the odds on that! I went to get my number. I had a quick chat with Lloyd Isam just before the start, with Chris the local blind runner (absolute inspiration right there). 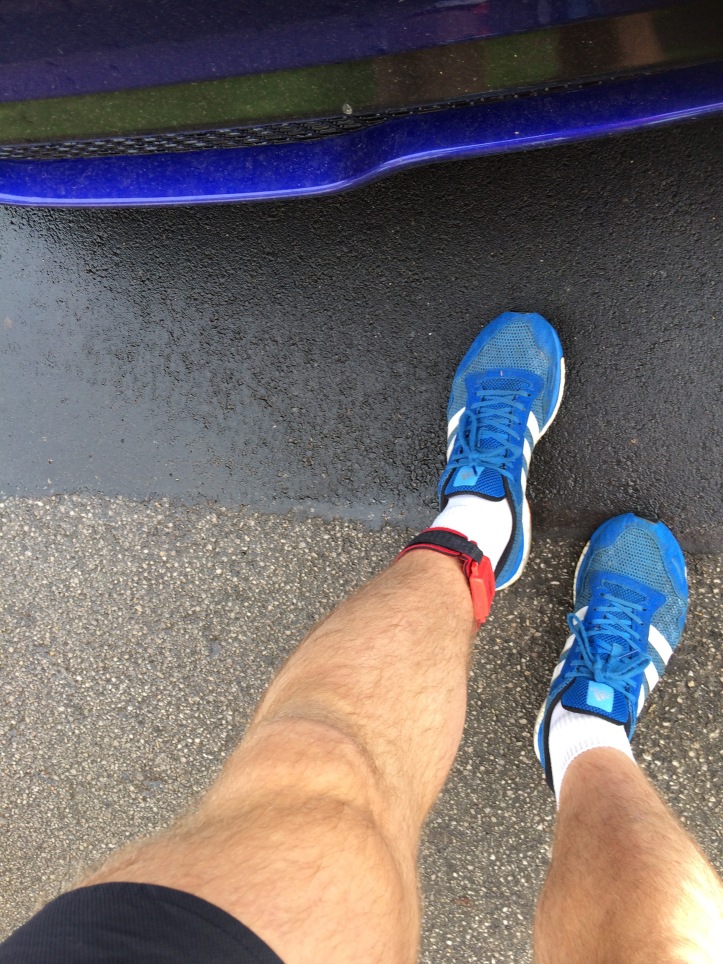 Not a fan of the timing tag choice, feeling like an escaped convict off I went for a warm up. The race started at 10, with the traditional brief from the race organiser off we went. You started with a flat 1 mile loop around Epworth Market place, I set off quick to break free from the crowds and eventually settled into 5th place by the time we left Epworth for the journey on the country roads. Early on it was easy to tell that the race was going to be largely overshadowed by the wind, with a cheeky glimpse between miles 2-4. Water station 1 came at mile 4. It was really quite refreshing as I hadn’t had anything to drink all morning before the race, I think I finished the full bottle still wanting more! The first 3 mile were slightly undulating, gradually flattening out by mile 4. I was passed at the water station now finding myself in 6th, but I knew I had more to give. So tucking in behind for a quarter of a mile to recover and then burst. I had the Clowne road runner now in sight, he was in 4th position and like me had settled here quite comfortably. I knew I could probably catch him and 3rd wasn’t too far away.

As we ticked off 5/6 and began to approach the 7th mile, the race was getting much closer for 3rd place. Just before the mile marker the guy from Clowne took 3rd with ease. Then so did I, now finding myself in 4th. I made my move quick and jumped to 3rd; kicking on some more to raise my pace to 5:55 for a little while. The 2nd water station approached, on a long lonely road. Quite possibly the first instance I’ve ever seen this happen in a race, but it was unmanned with water in sealed multipacks of 12? I was gagging! But decided not to loose time, as I was on for a sub 80 finish, my main goal for the day. Finding myself in 3rd, the wind behind me, it felt ace and comfortable. But mile 8/9 ticked off, flat and pleasant. Mile 10 the third, but my second drink of the day. Again a full bottle for me! As soon as we left the village mile 10 was in, that was it.

A runners worst nightmare, WIND. A relentless non stop, constant driving force against my body. I am not aerodynamic. The longest 3 miles of recent history, with a small drag up hill to the finish. The pleasantness had completely gone. A true drag. I blew backward over mile 11, tried to find shield in trees at mile 12, and was glad it was over by mile 13. I was running on my own, on lonely road, trying to find a ‘race pace’ in The Great Hurricane of Axholme.

I finished in 1:21:10, 3rd place ultimately, some way off my target but I’d personal place it down to lack of aerodynamic ability, in the wind tunnels for testing soon! However still ticking off another Half Marathon completed, York is 2 weeks away now. Snowdonia being about 5!