Every single day. Not one rest day, because who needs them really? 366 days for me, trust me to start doing this on a leap year! Streaking doesn’t mean running naked through the streets, by the way. It’s running everyday. If you have one rest day a week that’s 52 a year; that’s 14.25% of days wasted. A 30 minute run is 2% of your day. I’ve been achey a few times, carried a few niggles but I’ve run. I’ve improved, I’ve been poorly, got a little worse and improved some more. 50 mile weeks and 150 mile weeks. Raced in some beautiful places and some not so scenic places.

When I started I didn’t know it was an actual thing, I just fell into it. I was running everyday but Friday, and by chance I ran on a Friday and PB’ed the next day at Parkrun. I did it again, and PB’ed the week after. I was feeling less aches and pains; thinking this must be good for me. I then didn’t have the opportunity to run on the Friday, then at Parkrun, I ached so much, was so stiff and couldn’t move. Running a slow Parkrun followed. That was that, Friday wasn’t to be my day off anymore. Changing it to a 4/5 mile recovery instead. Now I’m on a 13 mile recovery, but that’s between me and you. So keep it quiet, don’t tell the doctor. It lasted for 3 weeks, where I had to have a day off, so one Friday a month, I’d take a day off. I then got fitter and needed another challenge. Its the type of thing that doesn’t appear on your power of 10 profile, I won’t receive a medal or t shirt; not everyone will know about it. But I will have achieved something much greater and finer than that.

Taken from Streak Runners International, ‘The official definition of a running streak, as adopted by the Streak Runners International, Inc., and United States Running Streak Association, Inc., is to run at least one mile (1.61 kilometers) within each calendar day. Running may occur on either the roads, a track, over hill and dale, or on a treadmill.’

My first attempt started on July the 10th, I’d been away with work and not run for 3 days; because I couldn’t, I was on a residential, meant to be looking after a group of 15-17 year olds. I decided upon returning, no more days off, no more days to go to waste. It started as training, ‘active recovery runs’ a gentle stroll out on a Friday would replace my day off. I ran better and ran faster, PB’ing at Parkrun previously on the Saturday, so it must be working. I feel worse, when I don’t run. This attempt ended on November 29th 2015, with a violent Norovirus. The next day, I went out and did 5 mile; I had a 50 mile week that week, feeling crappy. My shortest run week for the duration of the streak.
In this time I have set a Parkrun PB, 10k PB, 10 Mile PB, Half Marathon PB, a 20 Mile PB and a Marathon PB; also collected a few spot prizes at events. 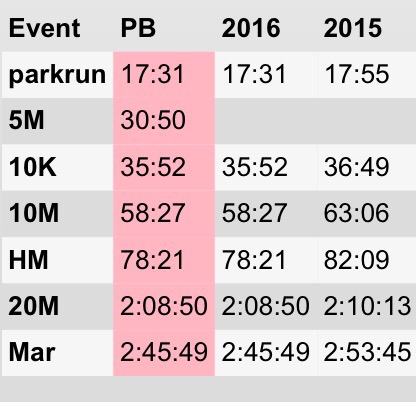 Adding to that my Barnsley 10k PB run of 35:51; that’s not gone on my profile yet. It’s all the small margins in running!

I’ve done all of this on high mileage weeks, seeing a 50 mile week from when my streak first started, progressing to 90 mile weeks in the new year; and since August hitting 130 to a recent 150 mile week. I’ve run a lot! And I’ve enjoyed it. I could take a rest day, I could taper more; but that wouldn’t be my way of doing things, it wouldn’t be real to me. I’d feel like I was cheating myself.

-5,559 miles, not including tonights speed work

-And only missed 1 Parkrun, due to Snowdonia Marathon.

-I’ve run up mountains, fells, the ‘Wigfield Banking’ and Locke Avenue. It’s truly taken me to some great places and I’ve met some interesting people I’ve been on my own and sometimes with a small group.

I’ve had plenty of highlights and a even more low points. I’ve had some runs where I’ve felt like packing in; been seriously dehydrated, sick and swayed side to side. I’ve scoured the roads of Barnsley, been a little bit further a field, most of the time on my own. Been rarely accompanied by others, for the odd occasion. On the other hand, I’ve had runs where I’ve achieved something, PB’ed plenty of times, run up mountains, adventures out and found somewhere new. I’ll bore you to death with them another day.

The doctor would probably prescribe rest, recover and let your body recuperate (a physio might say something even worse), they’ll say running everyday is bad for you and recovery is also just as important; but seriously all you have to do is run. You are a runner, so RUN. Running is easy and its as basic as you make it, I could sit back and absorb all of the stats after a run, analyse them to death; I used to fancy myself as a statistician. I’ve learnt not to now. I could sit back, look at cadence, vo2 max, stride length, vertical oscillation and heart rate; my watch measures it all for me. Its the minds weakness that you are letting in, the body is always ready, its ready to survive; it will adapt. All you have to do is run fast, and be prepared for anything that comes. I’ll run my race and do it my way, it doesn’t matter about the person next to me or what the stats are telling me, I’ll arrive on the start line having already completed 120 mile since the previous race last Sunday. Where all the miles done, role into one big race; I’ll be achey and never truthfully be fresh. Running is a lifestyle, a choice. I don’t do it anymore for training, I do it because its a part of my everyday life. Racing is just a part of the routine, a small marginal percentage within my week. Many of you will not see me bent double over the wall at the front of my house or collapsing at the boot of my car, leaving sweat all over the bumper, day in, day out, struggling to breathe because its too cold or too warm. Dehydrated past the point of sore lips and headaches, attempted drinking running water from the fields on the trail at Dunford. That hungry that I’ve gone and demolished everything in sight, dropped in at a shop and promised I’ll be back later to pay, leaving a jumper as a returnable deposit. I’ve survived on sherbet lemons for plenty of my long runs. Throwing up at the side of paths, in woods and once nearly over the small footpath motorway bridge at Wigfield; thrown up once for the full day and PB’ed the day after. Admitting myself to hospital for a swollen intestine/appendix, turns out my body doesn’t cope well with bread. I’ve had bruised toes, nails fall off, some slightly busted ankles and a painful achilles. None of that matters; because I’ve come out the other side a lot stronger than I was before, psychologically and physically. One day, you won’t be able to do it anymore, so you might as well run it when you can, all that will matter is how you’ve done it; and I will have done it my way.

Have a go and try a streak, whether it be a week or two, stretch it to a month? Maybe you could crack a year! Me on the other hand, I’m going to keep going and going until I can’t do anymore.