Whilst being unfit I spent some time looking through old photos, I thought I’d share this one, hence the choice for the cover photo.

I meant to publish this last weekend but I haven’t really had the time or motivation to sit down and write about running; so coupled a short write up about my illness and how I’ve tried to deal with it, with the Norton 9.

Potentially the worst couple of week of my running life.﻿

Starting a couple of Saturday’s ago.

I’ve had plenty of illnesses, colds and sicknesses since my streak started; I work with kids for crying out loud. I have developed some sort of immune system but my immune system hasn’t prepared me for this.

Sunday came and obviously I ran at Wombwell, and even managed a run again in the evening.

Monday’s plan went well, I was going to taper back 10 miles less per day. So ran 20 on Monday. Felt fine. I was then awake all Monday night to Tuesday morning; with a small pathetic little cough. Energy zapped went out for a 7 mile trot early in the morning before work because I couldn’t sleep anyway! I came home from work Tuesday night and just slept through to Wednesday morning pretty much. I decided then to cut back completely and 5k a day, just to keep in touch with it. So I ran 5k Wednesday afternoon, coughing and spluttering throughout. Legs feeling strong though and easy to turn over; even easier to pick up the speed, but frustratingly held back because of the pathetic cough!!!

Thursday still restricting myself to small miles but wanting to up the game massively. Choosing to stick to 5k; resting heart rate back to something like normal. But a run, including a nosebleed, snot and a little bit of sick! Not at all pain free. Blood all over my beard, shorts, top; I looked like a walker!

Friday came around, usual recovery day. Feeling a little fresher. Cough still ever present and plans starting to be made for the rest of my life undergoing cough management. I thought I’d try 5 mile, it turned into 5.5. A painful 5.5 but still done. Legs felt fresh so it was easy to turn it over.

Saturday; this is it. I was hoping to be back fit and able to have a good crack at Parkrun. Legs being fresher then ever; meaning I’d have a good crack at posting a good time. Probably my own fault for getting my hopes up. Waking up aching and shakey. Option quite easily could’ve been taken to not attend! But this is Saturday, this is Parkrun day. I’ve got to muster 5k out. It’s only 3 laps of the park. As the morning went on, I felt a little finer. Going out for a mile beforehand, which again was just to support my judgement call to attend Parkrun. I rocked up at 8.55, coughing and spluttering before the start. Leaving my jumper on and starting the 5k. Setting myself to just finish mode. First lap down and a painful cough dropping down from the tower. Miles behind my usual self and Scott at this point. Legs felt better than last week but still ache. I just sat in and coasted myself to a 18:47; at one stage would’ve been an eye balls out PB. It’s amazing what progress in running can do!

Sunday I said to myself that’s that. We kick ourselves up the backside today! Opting not to race I went for a gentle cough run.

New week now, new start, Monday and Tuesday the miles picked up but more of the same followed. Coughing and spluttering more and more when I finished. I started to surprisingly pick it up by Wednesday despite having no sleep the night before. Rushing every single one of my runs for the rest of the week, failing to get any run slower than 7 minute miles. Consistently breaking that barrier hitting 6:00’s.

We’re here again my 3rd Parkrun with this pathetic cough. A kick up my backside and the competition between me and Scott lead me to a 2nd place; 17:27. He finished in 17:10! Strong running. Miles back g something like now. And I’d say on the mend. ‘Touch wood’ but a week is a long time, so we will see what next week brings. 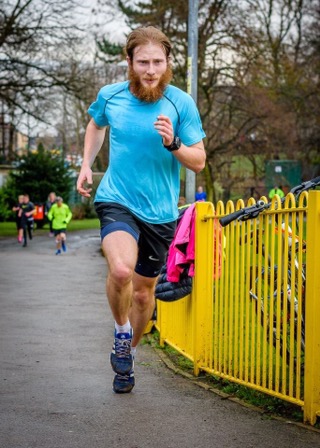 Regardless my streak still survives to fight another day, and some days I did really feel like giving up! But we’ve come out the other side ready for the fight!

Now onto the race! With being ill, I’ve magically got myself down to ideal race weight, tipping myself at 12 stone. The obvious thing is I could have potentially lost some strength, speed and endurance however. But there is only one way to find out and that is race! It’s addictive that racing.

I have been struggling to sleep recently dropping off at 12 and then waking up in the early hours; then not going back to sleep. I’ve been like this since Tuesday night/ Wednesday morning for some reason. Whether it’s overthinking, stress or frustration. But I’m sure it will get better!

Last night was no different, constantly waking up, tossing and turning. Restless and kind of wanting to just get out the house. Possibly run! But I decided to get out of bed at 7. Plodded around the house and sat on my laptop for a little bit. Eating breakfast in the process. Porridge and Nutella. Classic. Out the house for 8:15 for the steady drive through to Norton. Dry and ace conditions, well so I thought! Listening to Ed Sheerans new album on the way, for my fix of music today. Getting in the car park for 8:50 ish. Off to get my number.

On the return to the car, scott was just pulling in, parking behind me. Quick chat, lending him some safety pins and off I went for a warm up, using the same 1.5 mile lap that I’ve used in previous years. Scott said give me 10 and I’ll join you. Just about to start my second loop and he pops around the corner, a second loop completed with Scott. Still in my decent enough warm up pace and enough to kick on. Coughing was non existent. Back to the car, quick stretch at the gate. Watching some cars struggle to get in the car park and some to get out of it.

Scott then came for another 1.5 mile loop, the addict! Joining Simon Newton for a chat along the way. 4.5 mile warm up for me and 3 ish for Scott. Stood now outside the working men’s club. Chatting with Damien Briscoe for a little while. Race start nearly here. A Keith Binney speech away. ‘Keep t left, tek thi earphones art.’ Chatting with James Thompson a little and Stephen Maddison as well. Off we went.

Setting quick out the blocks, a little bit. Catching on Scott’s shoulder for the first 400m and off he went. Soon settling down. The guy who eventually finished 1st passed me and I settled in 4th place. A sight of the lead car and just behind the front 3. From experience this course is easier in the first half in comparison to the second half. So you need to save yourself a little. A slower first mile that a usual first mile in 5:31; I knew that if I was to target 52:30, I’d have to keep my splits under 5:50 at least! Still cracking on and the front 3 had pulled away now. Finding myself out on my own. It would be like this for the rest of the race. Nothing exhilarating happening; just purely running as fast as I could. Mile 2 came around the marker banging straight in time with my watch. I didn’t see the split in the race, but it turns out it was a 5:39, a quick check of the shoulder; no one to be seen behind. And Scott battling for second in front. I had begun to settle down by split 3 and 4 hitting 5:47 and 5:49. Now reaching the water station and a quick drink out of a plastic cup. Surprisingly taking it without spilling any water, such an achievement! Also in the second half of the race the ‘difficult’ part. I was still ticking over in 4th place, catching the Steel City Strider vest in front on the hills. The first true climb came, competing with the cyclists; I gave them a comment, ‘race ya’ picking 5 of them off. Only for them to catch me on the next downhill. I didn’t feel weak going uphill but neither did I feel strong. Still going but pace slowing. Up down and up down. Denied myself a drink at the second water station. An old guy giving distances between me and the guy in front on the bend, approaching the final downhill push to the finish, up and left, sighting the lead runner, second being Scott and the third placed runner. I was catching him again on the climb. Only for him to pull away on his downhill before I reached the peak. Smashing it downhill now. Mile 8 marker came up. Nearly home. Finishing in 52:07 on my watch. A 2 minute PB on the course and for 9 mile. In 4th place. Scott managed a 2nd place finish.


I went out for a 7 mile cool down, running towards to Askern 10k and 10 mile route. And out for 5 mile later. Making it 25.5 for Sunday Runday. Something more like usual. My heart rate in the race remained low but my resting is still a little high; but that could be due to lack of sleep as well due to other factors. The cough comes after I stop running. So I don’t know if I’m back in complete shape. But definitely more positive then last week. We’ll see what this week brings. I’ve got Retford Half coming next weekend, then the East Hull 20. Marathon training is taking shape and the April 2nd is approaching fast! The streak survives and is sitting on 462 days!

It’s back baby! 💥🎉
13.1 miles for a Friday!
Enjoyed the weekend as ever with @n4omiid
Post run thoughts! The miles are creeping back up, speed will return above and beyond what I was capable of.
Walkington 10k on Friday night…
Couldn’t decide how to pose for the photo… personally think I solved it?
Massive epic quote about being a leader of the pack and not a sheep… something like don’t follow the pack, stand out, you know, be the lone wolf… and people will follow you, the usual scribble!
Counting down the days to parkrun’s return, we’re nearly there, just hold on!
Can I call it a throwback already? Some more snaps from Rother Valley relays last week!