Well Monday blues came on Tuesday last week. After a long drive back from Milton Keynes on Monday straight after the marathon. I woke up on my Tuesday expecting to ache and have shot legs; I did, aching and throbbing and stumbled around the house, went into a school in the morning and was out for a 10 mile run on my break. The morning to wake up must’ve helped loads! I then went to another school and was out for a 10 in the evening with Mark, Bryan, Charlie and Liam. Back at work and back to the grind, looking at my next goal in running.

Wednesday came around and working all day again. Spencer’s Dash in the evening. I went out for 9 in the morning. Legs still feeling kind of ok. Work dragged in the afternoon and I decided to run 3 mile to the Dash, 3 mile home as well and run the 3.75 dash. I was expected to blow up by the end of bench lane. After that I was definitely writing myself off after the trail section. I was expecting to be so far from best. We set off and Tom White set his stall early, kicking off massively leading the charge. With me and James Thompson sat in 2nd and 3rd. Seriously I was surprised I was up here. My legs didn’t wanna run and neither did I in all fairness! After a long day at work and Mondays marathon! Glanced at my watch and clocked a 5:17 for the downhill start. Kept thinking when am I going to blow up! Onto the bence lane climb, gruesome and I know it well. I train a fair bit around here. Still sat a long way behind Tom. He said after that he ran out that dominant cause he knew he blows up around the trail section. Did what’s best for him. That’s all you can do bare minimum. Just run your own race, we are all running our own race. Whatever your goal may be. I managed to pass Tom just after the trail section onto the final push to the finish to clock 21:10; 1st place. ﻿

I woke up Thursday, feeling heavy from the Spencer’s speed. Not enough sleep really. Had steady runs all day and played football at work in the evening. Friday and left it at 11 for the day. With my eyes firmly set on what the weekend was about to bring? As always a Parkrun, but then a track meeting at Cleethorpes and North Lincs Half Marathon on Sunday. After my antics earlier in the week. I wasn’t expecting anything too special. Parkrun was a steady one and took Jonathan out for 5 afterwards showing him my death motorway bridge crossing loop. I set off to cleethorpes as soon as I could. Arriving about 12.30 for my first event. 400 metre hurdles. Having not jumped an hurdle since university…

I went on to run in the 800 metres, helped measure the female shot put, took part in the javelin, 5000 metres and 4×400 relay. My target race obviously being the 5000, in which I clocked 17:06 and finished 2nd. Not too bad considering everything else I’d already done that day and the week!

I woke up on Sunday early for a 9 o’clock start at North Lincolnshire Half Marathon. Back on the same roads as Saturday. I was giving Lee Nash a lift. Both of us setting off at 7.15; too early this. Roads closed early, only made one error and stopped in a layby for Lee to have a quick pee! We arrived around 8.20ish, getting quickly into our running gear. I used the shoes Mark Yates returned to me this week. His feet must’ve stretched them! But my £13.50 eBay specials have seen better days, a month it’s taken to ruin them! We made our way to the start and find a toilet. Ended up in a bush near the start line. Hardly any toilets meant the start was delayed, the queue was horrendous. Plenty of chitter chatter around the startline. Plenty of recognisable faces. An interesting conversation with Simon Newton, an absolute legend. Who has been there and done it, worn the injuries and succeeds. His success is ace and from first meeting him at Rother Valley Half Marathon, when he got lost and still won the race, I’ve always seen him and he’s been a target to strive towards in a race. We both came to a conclusion from our conversation anyway. And as long as you have the stories to tell of where you’ve been, it doesn’t really matter! 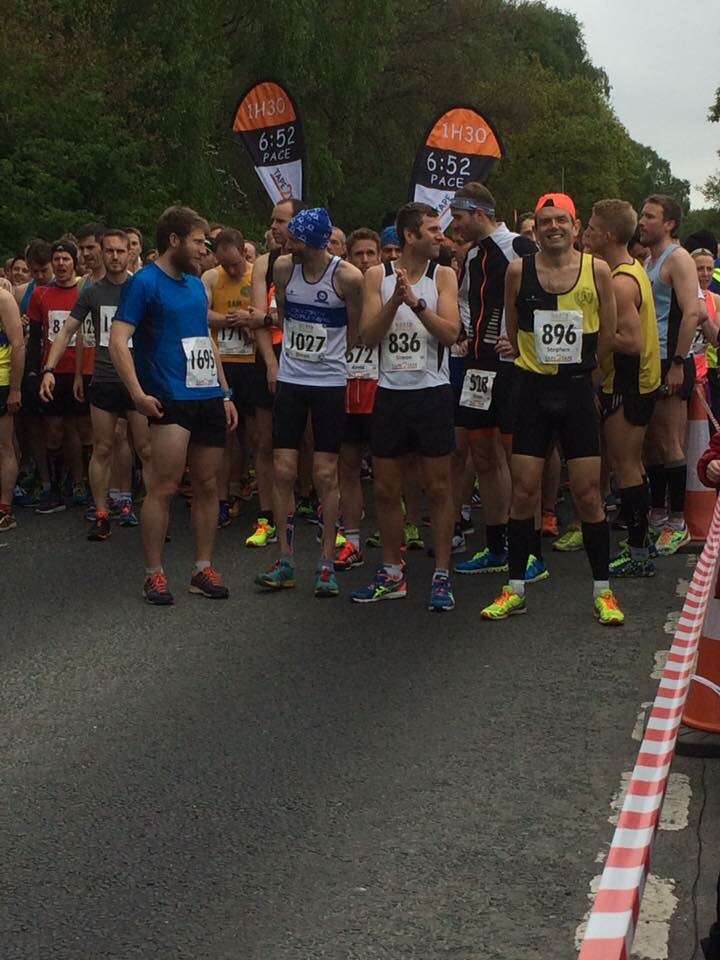 Different gravy completely! My legs once we started were clearly not going to hold PB pace. So target number 2 was to be around 1:17 pace. I’ve raced too much but these tough miles and block of races will only make me stronger. I set off letting the packs form and seemed content to settle in on my own, Stephen Maddison around me though; so not truly alone. It felt like I was working way too hard though to hold this pace and despite my 2 mile warm up, still felt like I was getting warm. North Lincs in the past has always promised pb’s, running it a couple of year ago, stood on the startline in my bin bag. Freezing! With Andrew Pearson and Martin Ball. All coming into the finish line pb’ing! Despite the freezing cold start. It’s easy to PB on here, on a pancake flat course. But January’s Inskip Half 1:14 ish would be difficult to beat on tired legs. I opted to use my bodies pace clock, my watch still split but I just didn’t look. I had the screen on map so I wasn’t getting any productive information. I soon settled into something comfortable and ticked the first water station off before you know it. Right after a small climb on the route. I was soon joined by Richard Ginn, I asked his target 1:17:45 was his previous PB. He tagged on for a few mile, I was confident that I was running quicker then 1:17 pace. Knowing what that feels like. Coming up to a water station, me grabbing a bottle and sharing it with him. It’s just one of those things Runners do. We were running into an headwind now, making work seem so much harder! Sponge station through, jelly baby station as well en route. It’s a friendly and easy Half really! I could now see Simon Newton in my sights, his pace seemed to have faded and knew that if I was to be around 1:17 I had to catch him. My aim to take Richard with me. We had turned and hit another headwind? I don’t know how that worked! We ran on to go underneath the motorway bridge, Richard seemed to have dropped pace so I said ‘Come On, keep pushing’ he pulled with me some more and before we knew it we caught Simon around mile 7. 6 to go, 35-40 minutes. From experience the route has changed towards the back end of the race. Mainly because of the different finish area, previously Glanford Park, now Quibell Park Athletics Stadium. At the point we passed Simon I was confident that Richard would probably meet his goal and I ran on kicking in for the last few mile. Targets scattered around in front of me to keep me on pace. I picked off one by one, gaining places but still keeping on pace, it had increased ever so slightly!

Wind still deceptively in my face! I was still expecting to fade at some stage and was definitely expecting the Yates shoes to give me some grief. 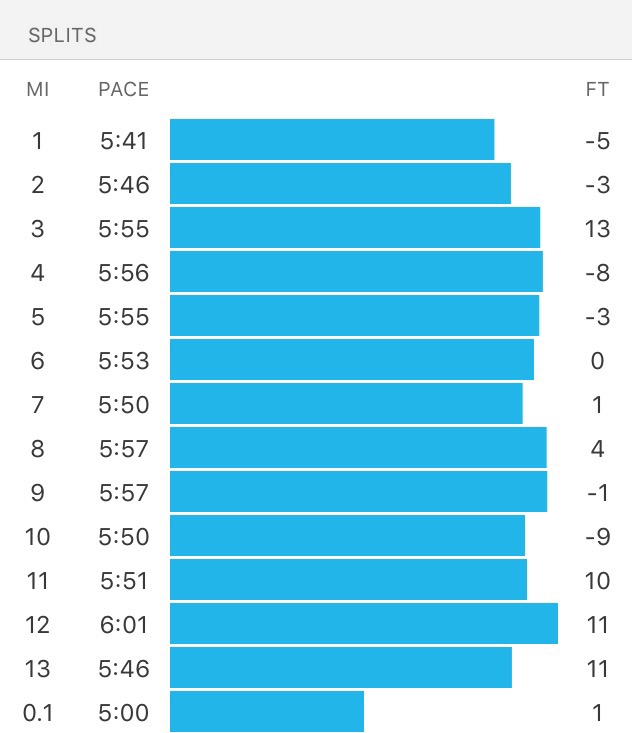 I grabbed a cake and walked around to stand on course near the track entrance to wait for Nash to finish. Stood talking to Steve Melber and Richard. I was expecting Lee to come in around 1:20-22 ish, so he shouldn’t be too long. Time kept passing, nowhere to be seen. I wondered if he finished quicker so went back around to see the finish area. Stood over watching all the track and he appeared around 1:32 holding his hamstring and taking a slow jog around the track. He managed to finish in 1:33:00. I watched him hobble to collect his goodies and then stand lonely in the field, stretching. So I took a steady ‘hobble’ over to him holding my hamstring, just so he didn’t feel all too alone! We both took a steady walk back to the car.

Since the Milton Keynes endeavour, I’ve had loads of people come up to me and congratulate me. I’ve had plenty of messages and conversations. Every single one of them has meant the absolute world to me. It’s meant something so much more than the win, than the PB. And I can’t thank everyone enough for the ace support. Team Barnsley or Team World? I’ve been asked this week how do I do it? So soon after a marathon? Fake it, till you make it. Hide and conceal your pain, just keep pushing on and something might happen. My legs have been in agony. All that matters at the end of it all, is that you have a story to tell!