Starting and finishing at The George Inn, Upper Denby. The pub has featured a lot this year for me. It was half way of the Boundary Run that I keep banging on about, it was the moment in the run that I felt like absolute shit, pardon my usage. But I did, I was dead on my feet, to drag to get there was unbelievable. My spirits were lifted on arrival, I was fed, watered, changed and limbered up to conquer the next half. The George Inn. It was the end of my Boundary Relay Leg the following week. It just seems to be dragging me back.

So today’s race, decided to enter on the day. Shaun Dimelow asked me the previous week, I wasn’t going to run. Having the race at Gilberdyke yesterday. £7. £6 if you enter in advance, starts in a field, parking is in a field. My favourite. I got there around 11. After a steady morning, my first morning without work for like 7 weeks. So I enjoyed it! Went to register. Got my number 95. And went out for a taster with Shaun, showing me the first mile ish. Turning back. And then seeing Damian, me showing him the first mile ish. Back at the start line now. David Needham and plenty other footpath runners in attendance. Always love chatting with David about his latest conquests and endeavours when it comes to races. He races a lot, and he’s in the vet 70 category! You ever get chance, ask him about his marathon PB.

The start quickly came around, a race brief, toes behind the tape. This is important, if you’re in a field with livestock, you’ve gone wrong. Ok. Tick!

Quickly we was underway, lap of the field and out onto the track. The field quickly thinned out and I found myself in the lead. Which I wanted to be, or as close to as possible. Because the first mile was narrow at the side of a field and had 3 walls the climb. Shaun closely behind, we cantered on. Up and over the first wall, into the field and passed a house with a ship in the garden as a playhouse! Looked ace. Now into the unknown, a steep downhill, onto some grass and through a narrowly trodden path. Nettles, bushes and heather. Twisting and turning, with some soft grass to the right and left. My ankle soon found it was a steep enough hole underneath as well. Ouch. Speeding through, with other runners breathing down my neck. Shaun said earlier that we go into the wood and it can get technical from there. A steep climb followed the woods. Down and down, before we hit a steep rocky climb, to then fall back down it again. Descending rapidly towards the woods. It was a bit technical actually. Tree roots, a few stepping stones and rocks. A deep river crossing would have made it ultimate. Bridges though. Winding now. Field thinning even more, then found myself leading a group of three. Me, Shaun and another lad I later found out is from Newcastle. Watched beeped for 3 mile, I knew Shaun said there’s a climb around 3.5 mile. So I’m waiting for it to come around. I see the path twist and no Marshall to be seen, in my head it seems right to go out of the wood now. So I do and find myself in a field of cows, with them staring down at me.

Remember if you find yourself in a field with livestock, you’ve gone wrong.

We saunter on, to see some red flags. Up the grassy banking, this is the climb, have we arrived late or early. We looked up the banking to see Chris Law at the top waving, Shaun just said carry on. So we did, however the lad from Newcastle later turned around and went back down the banking to the bottom, to then run back up it. Me and Shaun now left alone, I pulled my foot off of the gas and ran for a steady one coming home. Seeing a familiar face in the form of Steve Frith, behind a camera lens. 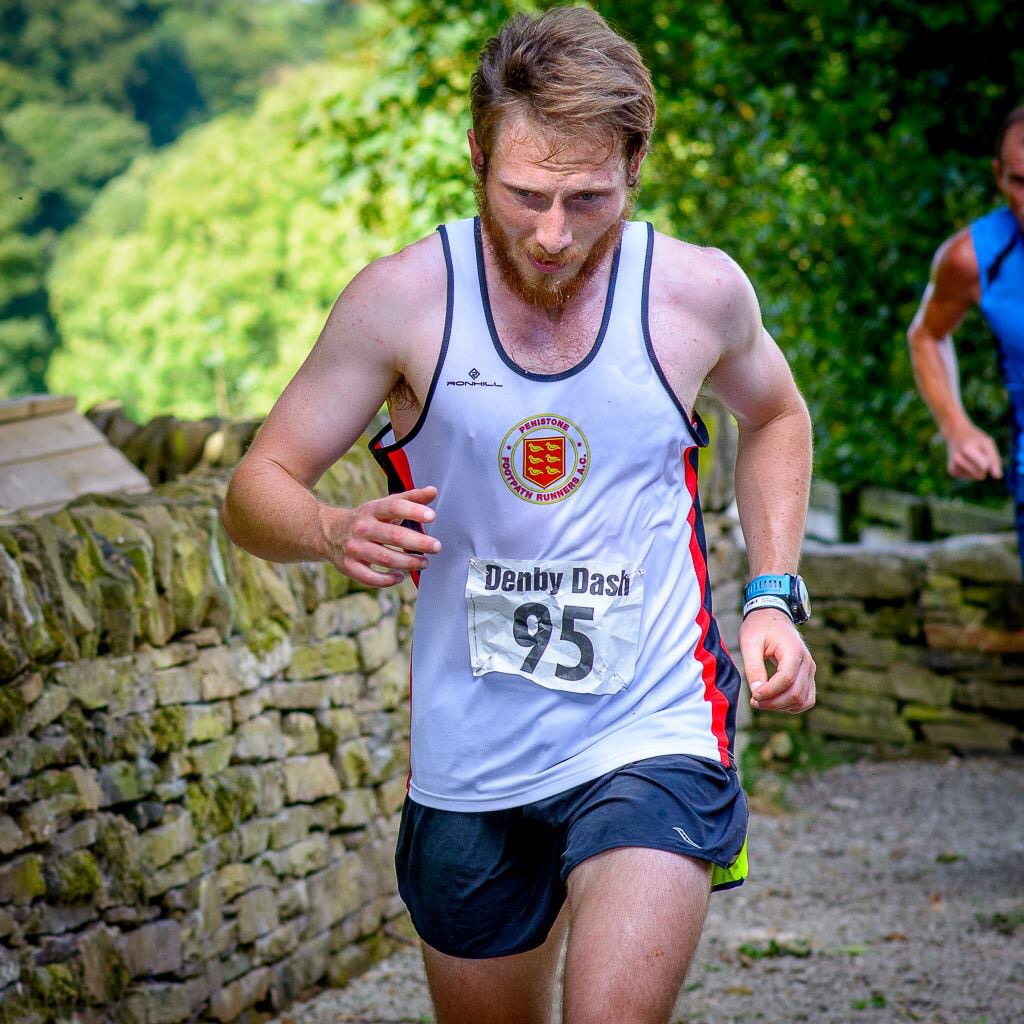 He wasn’t ready; apparently? Shaun screaming directions at me. Left, right. Careful, style. Back onto the track coming down now, I knew where I was. Flying coming down here. 5:30 minute mile my watch was saying. Passed the house with the boat, over the style. Passed a guy to say, oooo well done, you’ve been in the lead from the beginning. Twist, turn and now at the back of the George Inn, onto the field and finish, for a 34:29.

Shaun came in just behind me in 2nd place. 3rd was some way off around 3-4 minutes behind. My watch measured me at 4.95. Which for a 5 mile race is about right. Damian Kilpin charged over the line for 4th in just over 40 minutes, he measured at 5.23. So around 400-450 metres difference. We chatted with Mark the organiser, spoke to the lad who went back and all agreed the results wouldn’t have been affected either way, we had too much of a gap before we left the wood. And jostling of positions would have only been between the 3 of us. So that was that. But all in all, a well organised race for £7. Nice pub at the finish, with burgers on offer and Yummy Yorkshire in attendance. A band on as well.

During the prize giving there was an award for a local man and woman. Named after a runner who passed away in his 60’s who completed the Bob Graham Round and The Full Barnsley Boundary on Jelly Babies.

Have a read about him in the link at the bottom.

I wouldn’t usually do two blog posts in a week and would never dream of doing two back to back. But it was such a good race!