The come down after last week at Hull hasn’t really been existent. I’ve jumped straight back into it and set my sights up. I’ve recovered in some way, although that is all relative to the individual. Not super fresh, but not sluggish. Just alright. Steady away and getting on with it. Choices for the weekends endeavours were plentiful. With Cusworth 10k, a personal favourite, Pontefract Half Marathon, never done it and Penistone Hill Race, a local race, organised by mates and a no nonsense run raising money for the local sports centre. It soon became a no brainier. It doesn’t appear on your runbritain rankings or power of 10, but I’ve soon learnt that it’s not be all and end all. In actual fact some of the better races don’t!

Training this week has been interesting, just run to enjoy the beauty of running. With the seasons finally coming to some sort of change and the leaves beginning to fall, autumn and the spring are my best time of year for running. When I personally appreciate everything around me, before we get a full blown winter or summer. Also it means the marathons are usually in full swing. Which is another beauty of the slog! The dark nights settling in also meant the start of the tunnel season with the gang. This time last year we didn’t have many people rocking up at the tunnel or dam wall, initially. Me, Scott and Shaun regularly. Joined by a few more sporadic attendees. Wednesday I pulled into the car park, with Ellie in tow, to eventually see 20+ runners rock up. Fantastic. Fantastic that it appeals to other people and fantastic that shows that the benefit I feel, Kieron now feels and Charlie now feels, amongst others. Wants to be shared by others. Makes winter speed training interesting when it’s shared with others and when they get some success. Makes it feel shared. Seeing runners like Hannah Butcher improve since joining Penistone and the speed crew. Younger runners like Harry Shelbourne or Kai Sunman come along and smash the reps out with natural raw speed. Now to be joined by Hugh Mackie and James Fryers. Having runners like Andrew Shelbourne and Paul Fryers giving us something to chase. Motivated by Shaun and his driven attitude. Sharing the reps, sharing the pain with all of us that turn out. Just looking for an improvement in someone’s time. Eventually. A personal highlight of my week.

Parkrun came around on Saturday, a pacing event and my 249th Parkrun. So I’m nearly there for that milestone of 250. I felt relatively tired on the Saturday, but still comfortable to run a 17:07 officially and get myself off to work in time. I then found myself stumbling my way through to Sunday before I knew it and getting my trail shoes on, pinning a number to my vest and ready for another race. The Penistone Hill Race. From the Humber Bridge to Hartcliff Hill in a week. It’s not a bad change of scenery at all. In honesty I think I prefer Hartcliff. Anyone would be mad not to. I woke up after a small lie in, compared to usual. Ended up parking at the Penistone Paramount, jog to the sports centre and get my number. Seeing plenty of familiar faces from the running family. Turning and chatting to everyone around. Now this is what it’s about. Went off for a small jog up and around the TPT. To then find myself at the back of the Tesco on the show ground. Chatting with Kevin Doyle around the start line, dumped my t shirt in the garage and before I knew it. I’d woken up and Shaun was doing the race briefing. £51.50 put up if you beat the course record today. Tom Saville from Dark Peak was present, the perfect candidate. Alongside Scott, Joe, Stuart, Kevin and hopefully me. At times, I’m shocking off road! Maybe a couple of years ago, I’d be more confident in throwing myself down a hill. I’m alright going up them or racing on the flat, off-road. But in peak marathon season, no chance. There is one bit over the other side of Hartcliff, the cow field, where I knew my weakness was and where I knew it’s rutty. Shaun mentioned in the brief, I saw it myself in a recce/ hill rep session the other week and Damien said to me the night before. In the back of my mind, I just had, don’t do anything stupid, don’t roll an ankle, don’t get injured. Just run. Shaun’s brief was over. Ready, set, go. We was off and quickly Tom was in front, Me and Scott together, briefly and Joe behind my shoulder. Scott soon pulled away and found myself in a pocket of loneliness between him and Joe. Tom, way ahead! Up over the showground and climbing up through the fields. Felt ok, ish. But I knew straight away, top end speed is a no go today. I’d struggle to get anywhere near a 5 minute mile. Off road anyway. So just enjoy it more. Straight away it felt like we was at the top of hillside and chasing down Hartcliff Lane. We’ve used this hill for reps before, the speed team. So I was in familiar territory. I felt alright on the road as well, minimal road in today’s race however. Straight up a dirt track and onto a rutted stone path that is actually Hartcliff Lane. Before reaching a field and getting some relief. Spotted Carol Wolstenholme here, she’s gone from the Humber Bridge to Hartcliff in a week too. As a photographer.

Followed then by her husband Lionel.

As Damien had some organisation in this race, he brought his own little touch. As well as the constant Facebook posts and advertising. A Strava segment on the route, right to the top of Hartcliff. He had personally set the marker of 40 seconds and I knew it was coming up. In training, I’d done 50 seconds. In my two attempts up in the recce. So was hoping on race day, to somehow improve. Find 10 seconds, somehow. The recce, I walked and put my hands on my knees. So that’s how I’d try and beat it today, plus a slower approach? Maybe. The first time would be my only real attempt at it. The second time, is after a long drag. So wouldn’t be possible. Running down through the woods, anticipating the segment any moment now. Seeing it eventually in sight, I hit it. Beginning the climb immediately up, up and up. Twisting and winding, stumbling and falling up an hill. But not walking! Only the finish will tell me if it’s quick enough. Hitting the top and recovering quick before running back down, slowly and gently. Not in my element, but loving every minute of it! Getting to the road, now in my element for a short section. Before turning off after seeing Shaun Dimelow and a quick reminder from him. To not do anything stupid and don’t risk injury! Now onto my true weakness. A rutted, uneven cow field. Down hill as well! Heaven? Taking each step, not too precariously. But easy, dropping my head. Staring at where to place my feet. Hoping for some speed to come, but being too hesitant to think about speed. Like bambi finding his feet, looking up for a split second, to see and hear some clay pigeon shooting. Then seeing the debris fall at my feet. That wouldn’t be nice! Seeing my first cow of the race. Hitting some loose rocks before going down the steep bit of the field. It was longer than I needed before I hit a familiar section. The section most of us will know as Barnsley Boundary Leg 7. Short run on there before hitting a stile and then begins the long climb. I’d lost a place to Joe Sweetnam- Powell coming down the cow field. Mainly due to my rubbish descending! I was making ground on him now and eventually passed him going back up the hill. The flat and hill being my clear strength and the hesitation downhill my clear weakness. A massive drag followed, what felt like it went on forever; before eventually coming to the road and the second attempt at Damien’s Strava segment. This one wouldn’t be pleasant, it would be anything but! I didn’t walk, but it was a struggle to mentally tell myself not to! Finding myself in 3rd with some distance due to the massive climb. Coming up was a long downhill now though. All the way to the finish.

I kicked, but not enough as Joe had eventually passed me just before the final road section. I made some ground on him and passed him again on the hill section that we had used for speed reps in the past. But now, at the side of the farmers field and finish line in sight. He had bags of confidence in his arsenal. Whilst I didn’t have much. He passed me early on in the farmers field and it was a case of me forgetting my head. But still precariously making my way to the finish.

I managed to cross the line in 4th Place. 6 seconds behind Joe and in a time of 43:53. With over a 1000ft of elevation for 6.5 mile. The race psychologically shaped up as great Snowdonia marathon training. As a Penistone team of 3, being me, Scott and Dan. We managed to scoop the team prize. But more importantly plenty of money was raised for the local sports centre! 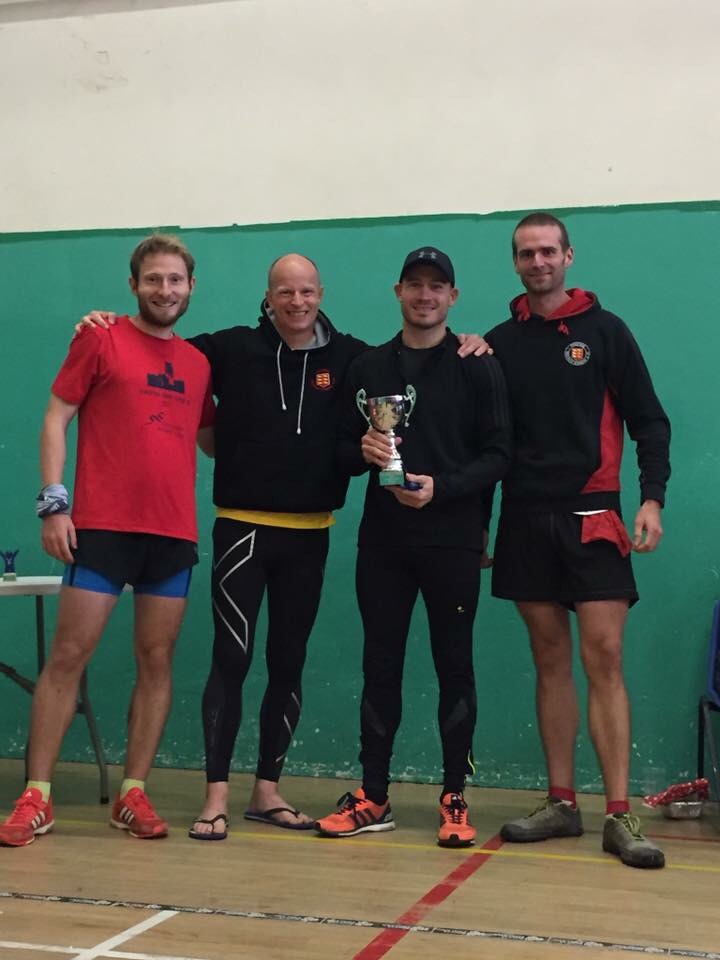 My splits are below, spot where the climbs were?

All in all, a fantastic race, local, cheap and cheerful! With plenty of friendly faces. I loved the Penistone Hill Race, even though I’m awful at running downhill! The course record was broken on the day by Tom Saville, setting a new record of 40:15. It was also great to see Scott up there again! He finished 2nd place in 42:03. Racing and looking well, despite having a few month off due to injury. Another good thing we can all take from it as well, is Damien might stop posting on Facebook as much now, advertising and promoting, The Fantastic Penistone Hill Race!