Every now and then, I’ll have a look around and find a race I’ve never heard of. Not knowing where it is or what it might even consist of. I’ll search run britain, or some results from previous events to find them. This week was one of those races. Looking around online, an event popped up that I might be interested in on my facebook. The 28th Burringham 10k. I had a look, no online entry. Small, low key, limited to 150 people. Had a look where abouts it is. Scunthorpe. Ahh, alright. I’ll have a look at that. Plan, enter on the day. Knowing roughly the area, having drove through here before. I know it’s flat. So it must be relatively flat? Maybe? A look at the course profile led my beliefs to be true! I asked a few others, to see if they would be interested. With initially only Kieron Reed and then Lee Nash saying they would.

Looking at how flat the course was and the area. I was hoping for some time around what my PB is. 33:46, set a couple of weeks ago at the Derwent Dash. Whether or not I’d have recovered from the Hull Marathon for top end speed would be a different question. I’m better over distance rather than the short stuff. It takes me 10k to get going usually! I’ve learnt that by now. The week in build up has been back to normality. With work picking up again and running fitting in and around. Massive turnout for the tunnel session which was fantastic and the added bonus of using the headtorches as our light in the tunnel, due to the main lights been out, made it feel even more hardcore.

Saturday brought my 250th Parkrun and in the Parkrun community it is a milestone. Where you join a club or runners that have all shown their commitment to the Parkrun cause by running 250 parkruns. Post Parkrun I had some time reflecting back over the years through the form of photos and browsing my times online. Giving me a little sense of awe and wonder as to how long the 5 years as been and leaving me wondering as to where will I be by the time Parkrun 500 comes around?

It really did made me think. I’ve taken myself from a 21:34 parkrunner to a 16:44. I’ve made steady progress, it’s happened through a form of learning and training. Parkrun hasn’t quite changed my life, but it’s helped push me along the way. Feeling rather stress free at parkrun and easy, also it being a milestone, secretly I did want a bit of a blast. Managing to cross the line in 16:44, equal PB. Being barked down the hill by Scott before nearly running into a pedestrians dog near the finish line, on the hairpin.

Anyway onto the race, arranging with Kieron a lift the day before. Nasher deciding to make his own way there due to work. The entry said it would close at 10, race starting fairly late at 11. Kieron said he’ll come get me around 8.45, on the dot! He’s not like me, always better at timekeeping! A steady 45 minute drive through arriving just after 9.30. Into the small and quaint village hall. With car parking fairly easy on the surrounding field, despite us trying to park on the road due to confusion.

Sorted the entry fairly easily, went to sit back in the car. Pinning the number on the vest, just the two Penistone vests on the line today. Later spotting Lee Nash making his way to the registration desk. We went off for a couple of mile warm up around Burringham. Following the River Trent. A steady one. No hill in sight. We then made our way back to the car, to get our kit ready and make our way to the start line. Finding ourselves walking down a country lane at a fairly easy pace, this would be a lovely pace! Toes around the line, a quick brief from the organiser. Take your marks and the whistle was blown. A quick, no nonsense start! Off out now, on course. Quickly kicked and set myself in. Only to be accompanied by the lead cyclist, the odd tree and the few supporters that scattered the route. The route looked to be a smaller lap, then an out and back section following the river, with a little loop in the middle instead of a straight turnaround. With it following a river banking, you knew it was going to be fairly flat anyway. I made my way forwards, one step in front of the other. I knew I had set off quick, by now I’ve learnt that I always do. Looking down and seeing a 1:10 split for my first 400m? Giving me a 4:50 pace. Ooops. Is my body thinking I’m treating it as speed training? A 1:15, 400m being 5 minute mile pace. That’s the usual target. I settled a bit, feeling the headwind on my face. The out and back section was going to be a case of headwind followed by a glorious tailwind to finish. Small lap done, catching some of the other runners who were also out on their journey. I didn’t mind sacrificing my perfect racing line. It’s all miles, Kieron and Lee were taking the mick out of me for running the long way around a small island roundabout on our warm up. It gave me an extra 5 meters though! 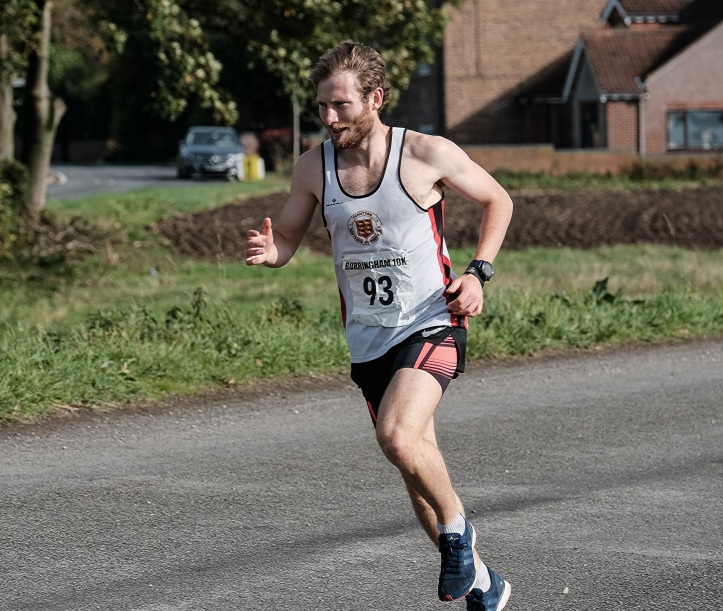 Now hitting the out and back. The 2 mile marker down. That felt quick. I began to fade a little with the headwind against me, making it tough going. The lead cyclist trying to advise me on the passing cars. Doing her best! A small left turn as soon as we went under the M180. Onto a road which later fell away into a rough, sloping farm track. With small ruts. The cyclist told me to stay in the centre. Still into an headwind, despite it giving me some sort of relief after the left turn. A small right turn and then the ‘race’ began with a tailwind with me now. Managing to kick up the pace, before rejoining the main road. Despite the marshall and lead cyclists best efforts, cars continued to come so I had to go on ahead. Although feeling for a short space of time that I’d taken the wrong turn. Only momentarily. To eventually be caught by the lead cyclist whilst running into the oncoming runners who were out on their journey. Back under the M180. Seeing the small village of Burringham in the distance. The 5 mile marker went. Although 400m’s out from where it actually should’ve been, leaving me thinking is it going to measure short this? Feeling now like I’m flying in the wind. Like a new man and fresh again. Its no longer a tow. Like the return leg back down to Penistone from Dunford Bridge. Trying my best to say, keep going or well done to the other runners as I pass. The lead cyclist hopefully doing it for me, as well as saying, cracking running to me. Winding the miles down, ticking the steps off. Making my way back to Burringham, pace has picked up. From my warm up, approaching the extra 5m roundabout. This time taking the inside line. Knowing that it is no longer going to measure short. 400m’s to go. 1 rep! Seeing the people in front and seeing the village hall again. 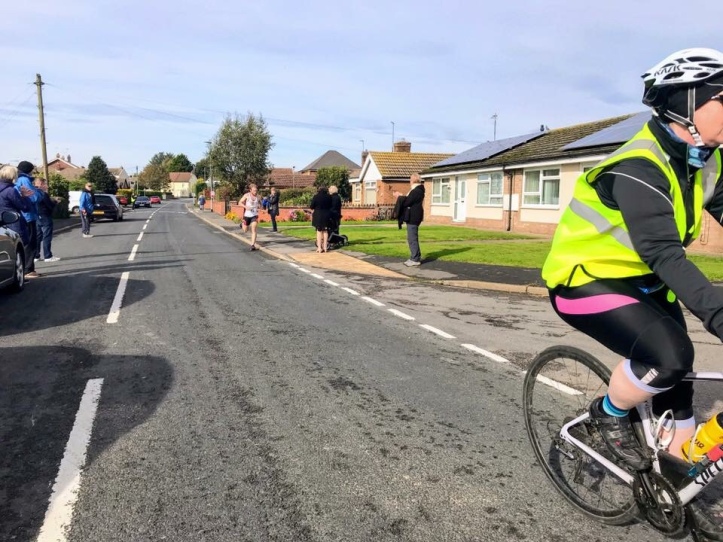 Onto the small bit of grass. Then through the finish line, race done. 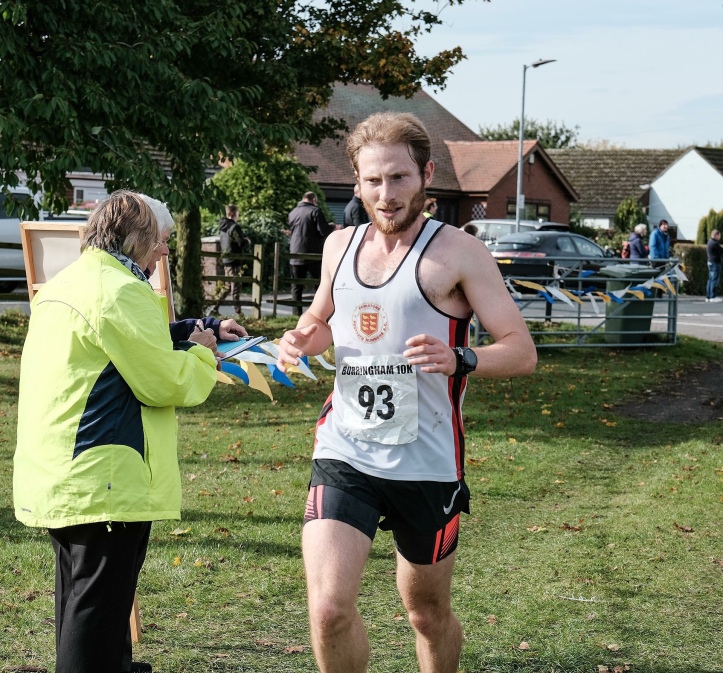 A new PB! Miles in the bank, straight away began chatting to the various relatives of other runners around the area. Commenting on the fact that I’m from Penistone Footpath Runners and complimentary of the area, having known or knowing someone from the area. Watching Kieron come in, closely followed by Lee, who also PB’ed. Both coming from completely different training, Kieron aiming to transfer himself up to his first half marathon in a couple of weeks and Lee being equally bonkers enough as me to be completing 2 marathons before the end of October. A couple of mile cool down followed for me, before getting changed and then making my way to the Village Hall to wait for the presentation. All 3 of us, being equally as complimentary of the race. It was only £6, well organised and really rather cheerful. I know I’d definitely be back, hoping I can interest some more people as well. I’m sure both Lee and Kieron will say the same as me as well!

Strava splits, you can tell I set off quick. But soon settled. Can you spot where there was an headwind?

Anyway now we breathe, maybe we rest? Keeping it focused the next couple of weeks! Big plans?

No official results seen as yet. On the paper at the village hall it was confirmed at 33:36!