An old school, traditional relay. Tag your partner and they go. A showdown between all the South Yorkshire clubs, to see how many, and how good their teams are. The teams that they can field, the range of ages competing across all categories. The men and women, busting a gut to not let the team down. It’s roughly 3.5 mile from memory. It starts in Lower Bradfield and runs on the road around the beautiful Damflask Reservoir.

Ever since joining Penistone in 2017, I’ve run this event twice. 2019 will be my 3rd. Pulling on the club vest and grinding it out.

19:33, not bad. The Penistone team I was running in that year, ran a respectable 5th Place. A team comprised of Scott Hinchcliffe, Chris Law, Me and Andrew Heppenstall. We ran well and was firing!

2018, we was back. Back as a team, ready to rumble and go again. But this time, in honesty I don’t think I was. The Damflask of 2018, signalled to me, a change was needed and a kick up the arse was what I was given. I was running, but not enough. My performance on the night, was honest. It was hot, I’ll give you that. I struggled, I blew out of my backside and struggled some more. Mileage had dropped, so had the commitment to the cause. I wasn’t feeling it, at all.

We fielded a completely different team to 2017, Scott was injured, Hepp wasn’t running as much and Chris Law had gone to university. This time we had James Thompson who had hit a purple patch of form, the newly signed Kieron Reed and Harry Shelbourne, who was showing potential. We ran ourselves to 9th Place. I ran myself a 20:15, some way behind my 2017 performance and some way off of where I wanted to be. I was disappointed and that’s what I needed, I needed the kick. It signalled my energy and kickstarted me into gear, to get back racing more and get out running, more. Doing more miles, faster miles and specific miles. Reenergising me. I got back in the seat after that. Picked my races and well the rest is history.

That performance got me to where I am now, for that I am thankful.

So here I am again, the Damflask Relay. Or the annual midge fest and for the first time, I am not unaccompanied. I have my team around me, and all the rest of the South Yorkshire clubs, that’s right. But it’s also a monumental moment for Ellie, it is her first road race. The first time she’s pinning a number on her vest and getting out on the road.

Our team this year, comprises of Scott (eventually he came back from injury), Andy Heppenstall (he eventually started running again) and the streamline Gary Briscoe. Personally I’d say we are stronger on average than we were in 2017. Andy has improved, I believe I’ve improved, Scott has improved and well Gary has definitely improved! It’ll be interesting to see how we get on and fair against all the other clubs.

Ellie’s team consists of herself, Sam Shaw and Rhianna Banford. Ellie has previously run 23:42 at Parkrun. I believe she is in better shape at the minute than she was when she ran the 23:42, so it’ll be interesting to see what she would get on the 3.5 mile Damflask course.

Going into it, I know she is nervous, possibly nervous as hell. In an attempt to calm the unknowing feeling, on Saturday we went for a drive around on the course, refreshing my mind and also introducing hers to the flat bits, the descents and that ascent! The Damflask course shares a bit of the Percy Pud route, for those that know that. The Percy Pud turnaround comes in the first bit of the Damflask. Starting in lower bradfield, climbing to the Percy Pud turnaround and running on what I’d call flat, heading towards the dam wall. Crossing the wall, and turning left following the reservoir. Then you begin to climb, it’s got two false peaks, you think you’re at the top and then you get around the corner, then you think you’re at the top again, only to see more as you near. Then you eventually hit the peak, only to fly down to the finish, and fly you must. You’re doing your best and giving it your all.

The Tuesday gave me a full day at work, a long day at that. Me and Ellie set off in plenty of time, by the time I got home anyway. Getting there, and heading straight to the cricket field, picking up our numbers and sorting them out on our chests. We were both running on leg 2, Scott and Sam were up first. Probably best, Leg 1 is so competitive and proper fast! Bit of a warm up necessary for me to get my legs turning over and get ready to race. A lap of the Damflask Reservoir for me, clocking 4.5 mile, watching Scott start in the process. Returned to the car, got my vest on. Spoke to everyone on the way. Back down and got myself in the pen, busy, busy. Everyone knocking around, anticipating the first runners back. Ellie was off doing her own thing, as soon as we arrived her nerves began to settle and she seemed ready for it. Then before we knew it. The lead car was coming through followed by Lee Milburn from Rotherham Harriers leading the way. Off went Arron Larkin. Next up was Hallamshire, giving me targets in front. Followed by Scott. I was off, out of Low Bradfield. Into the small climb and soon onto the flat, I thought I was far behind them out in front. But in actual fact, I probably wasn’t. I settled soon and began to feel comfortable from the fast start. Being on leg 2, we was yet to catch people on there laps. It felt lonely, a bit like a time trial. But that’s how it is, it is a time trial, your club against everyone else’s. Slogging it out, on the 2 mile flat. Felt as though I was gaining on those out in front. But not enough. Anticipating the climb coming up. Just around the bend, ish. It’s over in a blink. Head up, look ahead. One foot in front of the other, that’s all any of us are doing. It’s all the same, no matter the time! Turning the corner, onto the dam wall. Around 150 metres between me and the guy in 2nd. Sticking my foot down and aiming to run as quick as I could. Then we was on the climb, making our charge. Passing people out on their journey. I’d run the route 30 minutes prior, just avoided the climb. Had to save something interesting, didn’t I? Dug in, saw the Hallamshire Lad make the charge and overtake Arron. Probably at the right time, to push them both later on the downhill. Double False climb, looking, seeing what you think is the top. Its definitely not, hitting it. Looking for the split turn, the turn that goes away back down to Low Bradfield. Then that was it, over in a blink. That hill felt much longer last year! A 5 second count, as I had a little hill wobble, then let my legs flow. Into their own stride, opening out. Switching off the body momentarily. The finish is on you quicker than you think, spotting runners out warming up. Giving you some hope that the finish is just around the corner, bending, knowing the road. Spotting Carol Wolstenholme snapping away on the descent.

Seeing the finish. Spotting Hepp being called forward and crossing the line.

Hepp was off, on his way. Followed by Gary.. overall we managed 4th on the night, a few seconds outside of 3rd. But correct me, if I’m wrong? Possibly Penistones’ best ever performance as a club at the Damflask. So overall quite pleased, but can we get better.. of course, we can! I went for a few mile cool down before returning to find Ellie. Her telling me all about her effort….

She also managed to spot Carol on the descent! 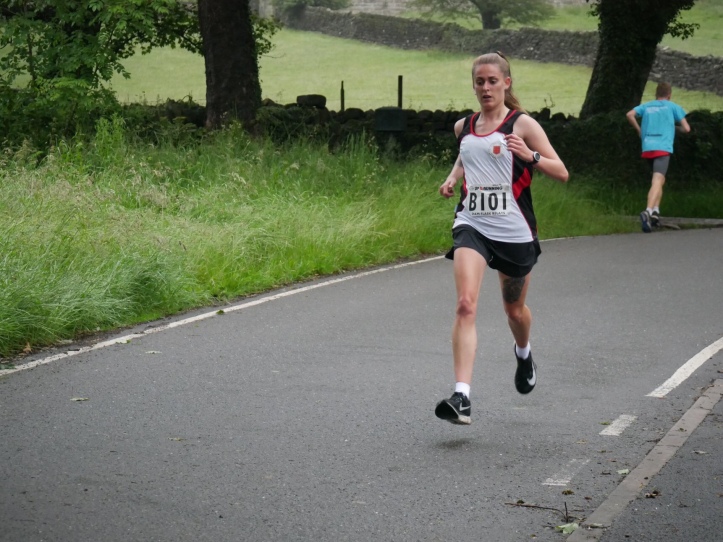 Her first ever race and a pretty sharp pace for her given she doesn’t break 8’s in training regularly. Her nerves settled like I anticipated, she ground it out. Judged the climb from our drive around at the weekend and played it well. She chatted with the Penistone Runners, enjoyed the chat. Enjoyed the people, enjoyed the company. Loved her first race, loved the experience. Leaving me proud and happy, elated that she had a good run. She felt that sense of achievement and reward, I’m sure we all feel when we finish. The sense of challenge completed. That in my opinion no other sport can offer that on the personal scale. The sense and biting urge, that as soon as the feeling of ‘why’ leaves the body, that feeling of wanting to go again. That feeling that leaves just enough on the taste buds. In hindsight realising that she was a little conservative, and given more experience she may have pushed harder, she may have dug in a little more. A little race sharpness and experience leading the way. Questioning herself, ‘can she run faster?’ and knowing she can.

Busy, busy! Marathon training is now underway, week 1 has been done. 17 weeks to go until the target race. Base miles have been set in the block of training approaching this, now is the time to get a little sharper over the base miles before the fine tuning begins a little later. The approach this time is a little different, I’ve tried to set up a marathon training group to get local people training together, I’ve wrote a plan for them, (for the first time ever). Over the marathon sessions, the long gruelling marathon speed sessions. That’ll be the first time I’ve done marathon speed sessions too! Sessions that are tailored and not sporadic. It’s all an experiment, an experiment; searching and delving deeper and deeper, hoping to find that slightest ounce of improvement. The Damflask was the turning point for me in 2018, hopefully 2019 it’ll be another turning point. A turning point eventually reaching, teaching and taking me, further and further.

Wash ‘N’ Wax....
My dad and my brother are ace, mother is somewhere in the background!
Running and life can throw you some huge curveballs at times. Deal with them and get back up... Just Keep Running!
If you know, you know, if you don’t know, get to know!
One legged wonder run this morning with Hanks around Howden and Derwent Reservoir...
‘The maker isn’t your successes and achievements; it’s how you overcome setbacks, difficulties and obstacles’
From back in the day when mass events were allowed! Second row at the @londonmarathon
Life lessons over on my YouTube today!
🎥 In case you missed the video over on YouTube!